When you are a kid playing little league you dream of making it to the big leagues.   You imagine yourself on the mound with thousands of people cheering your name.  The reality is most players never live that dream.  Thousands of players play professional baseball for pennies in stadiums that are falling apart, eating peanut butter sandwiches for lunch and dinner.   The lucky few that do get signed by professional organizations never actually make it on to a Major League Baseball mound.  But they continue to play, they continue to hold on to their childhood imagination. 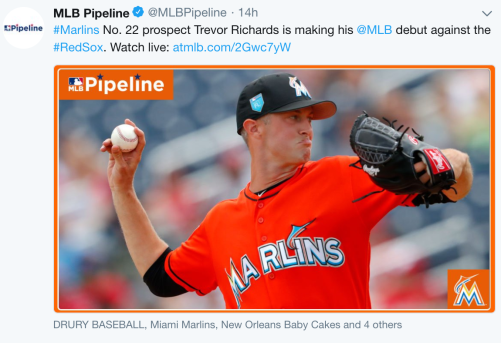 Former Gateway Grizzlies pitcher Trevor Richards, 24,  was one of those that held onto to the dream and it paid off on Monday Night in Miami. Richards made his major league debut just 21 months after his signing by the Marlins organization.  The local product from Aviston, Illinois (about an hour from St. Louis) didn’t get the win but he did inspire the baseball community.  Richards struck out 5 allowed 5 earned runs while going 4.1 innings. The biggest impact he made was on the world, social media blew up seeing the kid that came from obscurity to the majors.

Richards played his college ball at Drury University a division 2 school in Springfield, Missouri. Never touted highly by pro scouts he went undrafted after his graduation.  Not willing to call it quits yet he signed with the Gateway Grizzlies in 2015. Richards did not disappoint immediately taking a leadership role with the team at the top of the rotation.  His ability to mix up his pitches and locate made him an asset to Manager Phil warren. In 2016 Richards continued his role at the top of the rotation for the Gateway Grizzlies.  While he was pitching well in the Frontier League scouts were still not taking notice.  It was shear luck that a scout was able to see Richards pitch.  The scout that signed Richards, David Espinosa, was actually at a game to look at two relievers from the other team.  “His changeup is an anomaly,” Espinosa said. “According to analytics, the spin rate on a changeup is slower than it is for a fastball. We call it a ‘white ball.’ But the spin rate on his changeup is almost as fast as it is with his fastball.” Richards changeup and poise was enough for Espinosa to pay the $3,000 contract buyout from the Gateway Grizzlies.  It small price to pay for the potential that he saw.  Richards rewarded Espinosa by pitching his way right through three different levels of the Miami system eventually being named 2017 Marlins Minor League Pitcher of the Year.

Richards followed in the footsteps of guys like Scott Patterson former Gateway Grizzlie turned Yankee reliever and St. Louis Cardinal First Baseman Jose Martinez. Before Martinez was hitting in the middle of the beloved Cardinals order, he was hitting dingers for the Frontier League Rockford Aviators.  Richards is just one of the examples of players that have made it from obscurity.  The Frontier League is one month away from beginning its historic 26th season.  While this league may not have . the affiliations of a major league team, they do have players with real ability.  Trevor Richards start was not only a great moment for him and his family, but a great moment for the league as a whole.

The Gateway Grizzlies will look to honor Trevor Richards this season as they host a bobblehead on Friday July 20th.

Come see the next wave of hungry athletes, the Grizzlies season begins on May 11th when the Grizzlies take on the Schaumberg Boomers.