Jameis Winston with Bill Belichick may seem like a ridiculous combination.  But maybe this is exactly what Jameis needs. A stable organization that is going to have a solid game plan week in and week out.  The Patriots are beginning to rebuild the organization on the offensive side. Obviously the Patriots will look to bring back Tom Brady but even if they do, signing a 26 year old Winston to a two-year deal and having him as an insurance policy would not be a crazy idea.  The Patriots have young receivers with speed like N’Keal Harry and Jacoby Meyers that they can develop along with Winston.

This move would be completely wild if not for the stability of the Patriots defense and the mind of Bill Belichick.  Jameis would have to become a different type of quarterback, limiting his turnovers would be step one but that would be the case no matter where he signs.  New England has shown the ability to rehab players’ careers. If they can turn Winston into a winning quarterback it could be the greatest example of their internal strength.

The Chargers had a gunslinger last year. Their problem was their gunslinger was old and past his prime. Jameis has similar turnover issues as Rivers but he does bring a bit of mobility needed to allow talented receivers like Kennan Allen, Mike Williams and Hunter Henry to get open and push downfield.  Winston has never had a versatile runningback like Austin Ekeler that can be a solid check down option for Winston.

Los Angeles is looking for a splash, but seeing Tom Brady join the AFC West competing with Patrick Mahomes twice a year would not be a good move for the GOAT.  Winston wouldn’t be as flashy but pairing him with those skilled players and a defens that can force tunrovers make him a great fit.

The Packers have Aaron Rodgers.  Do they really need the headache of Jameis?  The answer is no but would it really be a bad idea to keep their options open as Rodgers gets closer to the tailend of his career.  Roders is 36 years old and has shown injury issues over the last two seasons. Having Jameis on the bench ready to step in incase of an injury would allow the Packers to have a solid option rather than throw out guys that are nowhere near the skill level of Rodgers.

We have seen what Jameis can do with talented receivers, placing him with Davante Adams would work very well.  Quietly Jameis has really found a way to help younger recievers progress so wo

Jameis Winston is a what I thought he was.

I have been preaching this for the last two seasons, Jameis Winston is a talented player that will never be a winner. He is the definition of a loser as a player and a person.  When you choose a player #1 overall you are expecting to get a great talent that is going to progress into a potential Hall of Famer.  It doesn’t always work out that way but in this case he has been the exact opposite of what you are looking for. Winston has gotten worse year by year and continues to just hurl the ball all over the field whether or not it makes sense or not.

Ryan Fitzpatrick will take over in week nine for the Bucs and hopefully the organization realizes that if you are forced to put in Fitzmagic mid-way through a season the guy he is replacing is most likely not the answer to your organizations future.

My advice for Jameis is to drop the I from his name and go by James Winston and hope that most people don’t realize who he is.  Maybe then he will get a chance somewhere else.

Redskins are the class of the NFC East.

The NFC East was up for grabs and the Redskins have grabbed it a locked it away.  Alex Smith and Adrian Peterson have given them leadership on the offensive end while the defense has quietly been very underrated.

The most surprising aspect of Sunday’s matchup with the Giants was that Washington was only favored by 1.5 points! The final score was only 20-13 but the score didn’t show the true dominance of the Redskins.  The Cowboys and Giants are flashy, the Eagles are the champs, the Redskins are the best in in the NFC East.

The Saints are legit contenders.

The Saints are good.  They are very good.  Week 1 they were tricked by the Fitzmagic but since that lose they have won 6 in a row in impressive fashion. The return of Mark Ingram has given them another weapon to use along with Alvin Kamara and Michael Thomas.  Drew Brees is known for spreading the ball around, whenever you think that you have them figured out they find a new star in the making.

The Saints have had three impressive wins versus winning teams the Ravens, Vikings and Redskins.  The Saints will continue to be tested as their schedule doesn’t get much easier down the stretch of the season. The are looking at matchups against the Rams, Eagles and Bengals over the next three weeks.  The Saints have the ability to run, throw and the defense has stepped up holding down the run.  I think they take down the LA Rams this week and the rest of the NFL realizes this team is for real.

The Steelers may not need L-Bell.

James Conner continues to roll along as the premier back for the Pittsburgh Steelers. Conner has the support of the locker room and the fans.  146 rushing yards, 66 receiving yards and  two touchdowns are LeVeon like numbers.  The Steelers have pulled off three straight victories including two in the division.  With the Ravens loss this weekend to Carolina they have been put right back in the driver’s seat of the AFC North.

So what happens if Bell returns from his hold out?  Does the team really play as hard for him?  If he is in shape and ready he can be a difference maker for them.  At this point how can they turn the backfield back over to Bell.  Conner has earned his playing time and the team is winning.  James Conner is for real and he wants to be there.  Trade Bell and get yourself something for him before it is to late.  Bell is great, but sometimes its time to cut the cord.  The time has come for the Steelers.  This is James Conner’s team. 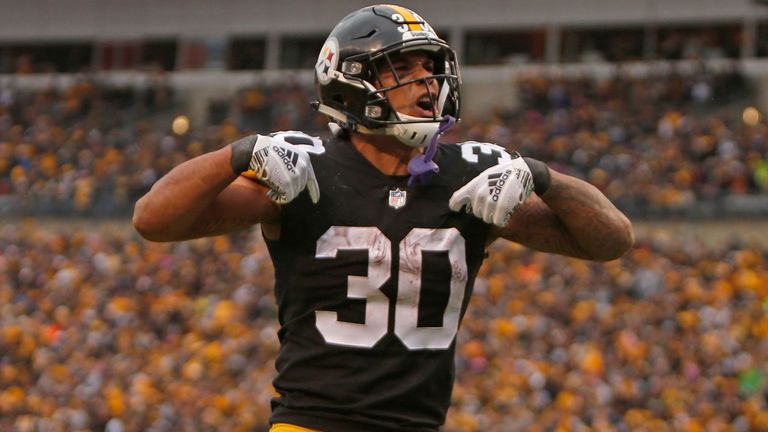 Coming out of Florida State Jameis Winston was the clear choice for the Tampa Bay Buccaneers.  A two sport athlete, excelling in baseball as well as football Jameis had everything physically a team wanted.  Standing a 6′ 3″  weighing 235LBS  he was the perfect size, he was mobile, agile, possessed great arm strength, had a Heisman Trophy and a National Championship.  The Buccaneers took Jameis with their #1 pick in the 2015 NFL draft.  They had the face of their franchise, the quarterback that was going to lead them for the next ten years.  As they prepare for the fourth year of Jameis Winston the Buc’s may need to rethink their plans.

Entering the NFL with a checkered past, Winston’s talented overshadowed any problems that may come up from drafting an accused rapist.  The Buccaneers wasted no time turning their organization over to Winston naming him the starters right away.  He flourished early dominating his opening season matchup with fellow first round quarterback selection Marcus Mariota, confirming that he was the right choice for the struggling franchise.  Winston set franchise rookie records in pass attempts, pass completions, passing yards, and passing touchdowns. Winston finished his rookie season with 4,042 passing yards, finishing 23 yards short of the franchise record set by Josh Freeman in 2012.  Tying the record for touchdowns in a game by a rookie (5) on November 22, 2015, against the Philadelphia Eagles, Winston had arrived. After Tom Brady declined playing in the pro bowl, Winston was chosen to take his place.

Following his rookie season big things were expected of Winston and the Buccaneers. Winston led the Buccaneers to their first winning season in 6 years after defeating the Carolina Panthers  in the regular season finale, during which he broke the franchise records for passing yards and passing touchdowns in a season and became the first quarterback in NFL history to start his career with consecutive seasons of 4,000 yards passing; however the Buccaneers were eliminated from playoff contention via a tie breaker with the Detroit Lions. He was ranked 57th by his peers on the NFL Top 100 of 2017.

Entering the 2017 season it was not just Winston that had the high expectations but it was the team in whole.  The pressure seemed to bring out the worst in the team opening the season 2-6, immediately falling out of contention.  The poor start coupled with a Winston injury doomed the Buccaneers to a 5-11 season. While Winston’s numbers and play have shown flashes of brilliance the lack of development on the field has been noticable. After three years as an NFL starter, Jameis Winston is still hard to figure out. He has produced dazzling highlights coupled with maddening turnovers, finding open receivers long after plays have broken down, yet coughing up the ball when he should have taken sacks. While his development of the field has haulted, his maturity as a human being has yet again come into question.

As Tampa Bay enters the 2018 season they have been forced to deal with the new that Jameis Winston will miss the first three games due to an incident with an Uber driver in March of 2016.  The latest incident has raised the question of how much is to much from a public figure.  The face of a franchise cannot be a player that continues to show lack of maturity.

Feb. 22, 2017: During a talk to students at St. Petersburg’s Melrose Elementary School, Winston says that boys are supposed to be strong but ladies are “supposed to be silent, polite, gentle.”

This comment shows a false sense of understanding about how men and women are suppose to be treated in society.  The early excuses for Winston’s actions were that he was young and needed to grow up, but how much time can you give a person who is such a prolific person in your community.  When I took a trip to Tampa two years ago every street light and sign that had anything to do with the Buc’s featured Winston’s face.  He is Buccaneer football, but is that really what they want?

The fact of the matter is they have regressed as a team over the last three seasons,  In an NFL where quarterback play rules all, Winston has tons of trade value.   Still being young enough for a coach to think they can help with his turnover problem and a GM thinking they can fix his personality.  Winston could net the Buc’s a solid second round pick or better if a team really believes in him.  In a time of social consciousness in the NFL the Buccaneers have to make a decision that I am sure they do not want to, it is time to move on from Winston or continue to allow him to put their team at risk.